The HTC one M9  mobile phone is finally here, designed

There are times when you have lost access to your

The Itel it1405  mobile phone is finally here into the market

For all lovers of 2go, we have good news as from today, 2go messaging app is now available for Windows Phone.

The Windows Phone version of the mobile messenger includes features such as: private messaging, file and photo sharing, contacts sharing and emoticons.

One thing seems clear, as the Windows version is not as robust as expected. For instance, besides the features listed above, 2go for Android also features: chat rooms, the ability to share audio notes and chat with friends on Facebook and Google chat which are not included on the Windows version.

The company, however, stated that features left out on the Windows Phone version will be available on future releases. 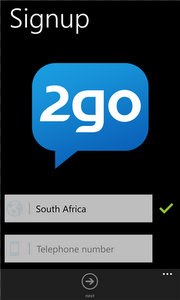 2go was Initially released in 2007, while the feature phones came on board 2013 when the first Android version was released.

There are lots of data plans to choose from, for

The Microsoft lumia 950 dual is finally here, designed with